Today we’re reviewing the K400 from Logitech.  We’ve been using this keyboard for about a month now and I can say without a doubt that it is the perfect keyboard for office presentations or just sitting on the couch.  It’s lightweight, simple to install and use, functions great and is even compatible with my large hands.

Logitech is a great company who have been producing top quality computer peripherals and related products for over 30 years.  The K400 wireless keyboard w/ touchpad is no exception. END_OF_DOCUMENT_TOKEN_TO_BE_REPLACED

Xbox One: Microsoft to change the way you watch TV Today Microsoft unveiled its next generation gaming console the Xbox One, and it’s plain to see that it’s not just about games any more from Microsoft.

One of the most exciting things I saw during the unveil ceremony was the Xbox One’s ability to serve as a video switching device.  What this means is that you will have the ability to run every activity via the Xbox One.  Whether you want to play a game, browse the web, watch a movie, listen to music or watch cable television you’ll be able to do it without switching inputs on your TV or surround sound receiver.  Switching between activities will be possible with the game controller, your mobile phone, or with hand gestures and voice controls via the new and improved Kinnect sensor. With Xbox One, Microsoft is finally offering a web browsing experience with Internet Explorer, and with “Snap” you’ll be able to multitask like never before.  Snap allows you to browse the web while watching a movie, watch TV while you’re looking for the perfect match making game on Xbox Live or any other combination you can think of.  It’s like picture in picture on steroids.

Microsoft also gave us a peak at what the game landscape might look like at the time of release.  Launch titles mentioned today are Forza Motorsport 5, Quantum Break and Call of Duty: Ghosts.  Microsoft also claimed they would release 15 exclusive titles in the first year, including 8 brand new franchises. It’s clear that Microsoft wants to change the way you watch TV by incorporating the web, games, movies and TV shows into a single device; the Xbox One.

Posted in Product Reviews | Comments Off on Xbox One: Microsoft to change the way you watch TV
Tags: Game Console, Home Theater, Microsoft, Xbox, Xbox One

Universal Remote Setup: it doesn’t have to be difficult

Sick of too many remotes on the coffee table?  Or how about having to leave detailed instructions for the baby sitter?  One of the most popular services that we offer here at Install Heroes is Premium Universal Remote Control Setup.  Specifically we recommend and support Logitech Harmony remotes ONLY. You may already have some experience with universal remote controls and I wouldn’t be surprised if your experience wasn’t good.  Typically universal remote setup involves reading through a user manual looking for a code for each device you want to control with your new remote.  An hour later, and after much frustration, you probably found that even after punching in all available codes, there is one device that just isn’t being controlled the way it should… How annoying. Setup for Logitech Harmony remotes is done by either of two different methods.  The first method is Myharmony.com.  This method offers a simpler setup which requires no software to be downloaded or installed.  The downside of this method is that you have fewer options for control of how the remote is programmed.  I suggest this method for standard users.

The second method requires you to download and install the Harmony remote software from Logitech.com.  The download itself is fairly small and should download quickly.  This software gives you the greatest control over how the remote is programmed, and is fairly straight-forward and user friendly.

Logitech has offered their line of Harmony remotes at a very affordable price.  The Harmony 650 we recommend below has a MSRP of $79.99 and is often available on sale for between $39.99 – $54.99.  There are other models of Harmony remotes at even lower price-points offering less functionality but maintaining the same great selling points. No remote on the market is as sexy or well designed as a Harmony remote from Logitech.  Other manufacturers seem to have a “design be damned”  approach to their remotes.  The sad part is that their sacrifice is wasted because they often fall short on the functionality as well.

Ease of use & unrivaled functionality

With the press of a single button labeled “Watch TV” your harmony remote will turn on the television, cable/satellite box and surround sound receiver.  It will then ensure each device is set to the correct input/source.  Now you’re watching TV after picking up a single remote, and pressing a single button.  One button or “One-Click” functionality means you never turn any device on; You simply select the activity you want, and Harmony knows which devices need to be turned on, and which inputs/sources they need to be tuned to.  The simplicity of it all means you won’t have to leave detailed instructions for the babysitter anymore, it really doesn’t get any better than that.

If you’re the DIY type then you’re probably wondering which remote you need, and where you can buy one.  Below you’ll find links to Amazon.com as well as some general information about the two most popular models of Harmony remotes.  If you’re not the DIY type, and you live in the greater East Tennessee area, please feel free to give us a call for a consultation or to set an appointment.  Remember;  Call and we’ll come to the rescue!

Smartphones are all the rage now-a-days.  It seems like everyone’s got one, and while most people only use them for games and web browsing they are extremely powerful devices.  Since so many people enjoy all the capabilities of smart phones, we’re often somewhat disappointed when we turn on the old TV.  If you’ve found yourself in this same situation, then this is the post for you.

We’re going to review all the top devices and by the end of this post you’ll know which one meets your needs and quenchs your thirst for content on your TV.

Things you should know…

DLNA – The Digital Living Network Alliance (DLNA) is a non-profit collaboration established by Sony.  What that means for you is that devices which are DLNA compliant will allow you to share digital media on your network.  If you have pictures, music, or videos on your desktop computer a DLNA enabled device will be able to access that media and play it on (in this case) your TV.

HDMI – This term shouldn’t be vague to most people at this point, but if you’re not familiar with it we’ll define it for you.  HDMI (High-Definition Multimedia Interface) is a compact audio/video interface for transmitting uncompressed digital data.  It offers the ability to transmit Audio, Video and Data across a single cable.

Roku – Roku may be the biggest name in the industry.  They were one of the first to market and have had success with a handful of different models.  We’re specifically looking at the Roku 2 XS, which retails for $89.99. 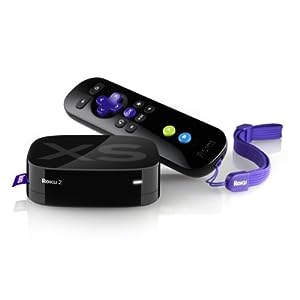 Pros:  Very easy to setup.  Simply plug in power and an HDMI cable to your HDTV, connect to WiFi and you’re up and running;  Offers Youtube Channel (unlike some Roku models);  Offers all the standards you’d expect like Facebook, Netflix, Hulu, Pandora & etc.  And now offers games like Angry Birds;  1080P Support.

Cons:  No DLNA support & narrow file format support;  Although you won’t be charged unless you buy a game or pay-per-view item, it does require you to enter a credit card number when you setup the box;  No HDMI Cable included…

The bottom Line:  Overall a good device, but lacks some of the features you’d really like to see in this type of device.

Apple TV – If you’re an Apple iOS fan, then you probably already know about Apple TV, which is now in it’s second revision.  If you don’t already own one you’re probably curious if it’s going to fit your needs.  Unfortunately it probably won’t.  The good news is that, unlike most Apple products, it isn’t terribly expensive.  Retailing at just $99 it’s right at home in this market. The bottom line:  The fact is that Apple, like many large corporations, doesn’t want you to have options if those options might limit their profits.  While most devices in this category are about opening doors and helping users get the content they want, Apple TV is all about closing doors and limiting what you can do.  If you’re not an iOS user, or if you don’t really care about screen mirroring or iTunes on your TV… Avoid this box.

Vizio Co-Star – The latest implementation of Google TV leaves much to be desired.  Since many video sources and websites block Google TV from streaming, you’re going to have limited options with this box.  Vizio is a great company that has been on the rise in recent years, and the limitations of this product really aren’t a reflection of them.

Cons:  Sites block Google TV so you’ll be limited on what you can do; No Hulu support;  No HDMI cable included…

The bottom line:  You’re probably better off with another device…  Here’s a great video review for this device from CNET

We give the Vizio Co-Star 2 shields out of 5.

Smart TV’s – Many manufacturers are offering upgraded models of their TV’s which take advantage of this new technology.  Samsung may be leading the way but they’re not the only ones getting in on this game and capabilities may vary between manufacturers.  Many offer a standard set of apps which typically consist of weather, news, stocks, and Netflix.  Some offer the ability to download additional apps.  Be weary of models without built-in WiFi as models requiring dongles often don’t function as well.

Cons:  Often limited on what apps are available;  The added expense of a Smart TV is often more than adding a separate device;  Often seem sluggish due to limited system resources.

Android Mini PC – We’re most excited about this line of devices.  If you’re looking for a true “Smart Phone” experience on your TV then an Android Mini PC is the answer.  With a fully capable web browser utilizing both HTML5 and Flash content you’ll be unstoppable on the web.  Android means full access to the Google Play Market and all the games and apps available therein.  From Netflix to Angry Birds, nothing is out of the question.  Small form factor means it’s portable; you can take it on vacation, to a friends house, or anywhere you go for that matter.  Some models even have the HDMI connection built-in so you won’t even need an HDMI cable. 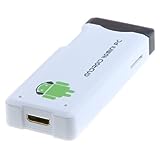 Cons:  No-name manufacturers may take you outside your normal comfort zone when making a purchase (although this isn’t much of a con for most people due to the extremely budget friendly price point).

The bottom line:  We can’t stress this enough, the only way you should go with another device is if you’re committed to having iTunes on your TV.  And even if you decide to go with Apple TV, an Android Mini PC would be an excellent backup device to take up the slack for Apple’s short comings.

We give Android Mini PC’s 5 shields out of 5!

You may also be interested in a great Keyboard with touchpad from Logitech for only $34.99

Lastly, Install Heroes offers a model of of Android TV box that has an option you won’t find anywhere else;  A built in Digital TV Tuner and internal hard drive slot.  Our box is the only one capable of replacing your cable/satellite service by taking advantage of free-to-air digital transmission.   The box retails for $289.  For more information contact us via email.  Contact@installheroes.com

I hope this has been beneficial to you.  No matter your choice, the future of television is here and Smart TV is it.  Enjoy!